Fray Pedro de Corpa was born near the great city of Madrid, and as a young man, joined the Franciscans in Astorga, Spain. His confreres knew him to be a wise man of prayer and a good preacher, and yet Fray Pedro was not content to live out his life in Spain. He volunteered to work in the missions in the New World. By the time he was thirty-seven years old, he had already spent ten years in La Florida and New Spain, which included what is now Georgia and Florida. The Padre lived among the native Guale (pronounced “Wally”) at the Tolomato Mission, which is believed to have been located near Darien, Georgia (about fifty miles south of Savannah). This was the village where the great chief (or mico) of the Guale lived. 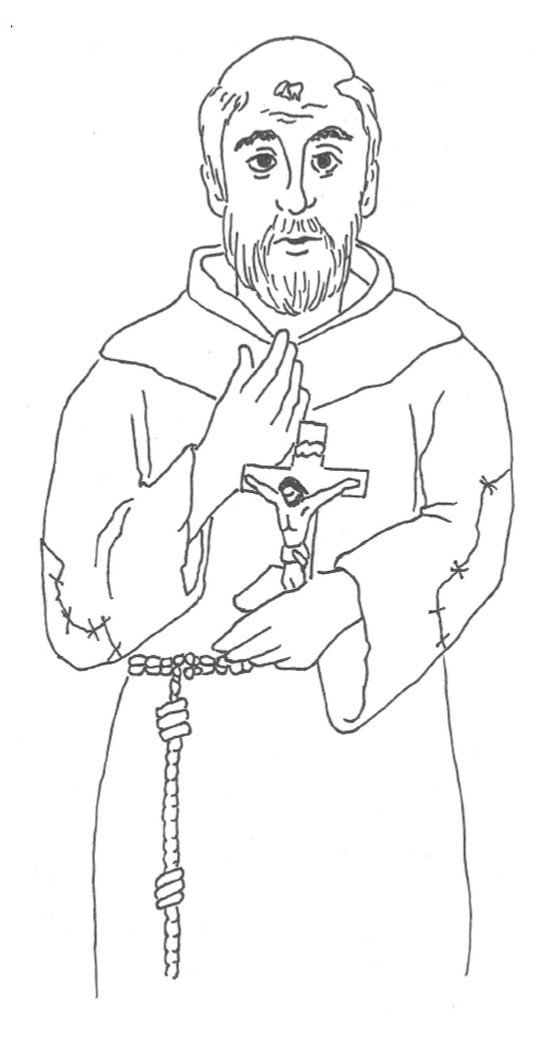 Fray Pedro had developed a fatherly knowledge of, and love for, the Guale. Even so, he knew there are certain truths that cannot be ignored and out of both duty and love, Fray Pedro admonished the young Guale prince, Juanillo, for his polygamy (that is, having more than one wife). Governor Menéndez and the Franciscan Friars trusted and respected Juanillo’s father, the chief of the Guale, so, consequently, they also trusted his son and heir, Juanillo.

But Juanillo was outraged at Fray Pedro’s gentle reproof, and thus, the rebellion of the Guale began with the martyrdom of Fray Pedro. The Guale, led by Juanillo, killed Fray Pedro in the early morning of September 14th, 1597 as he was preparing to offer Mass on the Feast of the Exaltation of the Holy Cross. He had just finished praying Lauds and was about to walk over to the chapel. Accounts of the time indicate that the young men snuck up on him and clubbed him to death, chopping off his head, and shamefully displaying it upon a spike. Juanillo would go on to set off a chain of martyrdoms throughout the Franciscan missions.