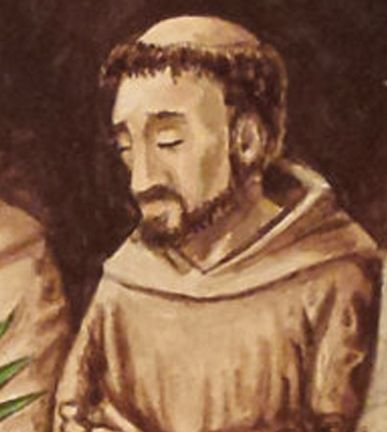 Among the five Servants of God, Fray Antonio de Badajoz is the only one not a priest but belonging to the Franciscan Order as a lay friar. Through the centuries of Franciscan history the lay brothers have been a distinctive glory in the Seraphic Family. With his special qualities of simplicity and his readiness to serve the needs of others, Fray Antonio is a worthy exemplar of that glorious tradition. With a great deal of the guilelessness of the legendary Brother Juniper of Fioretti fame; with much of the piety of his own contemporary compatriot, St. Paschal Baylon; with more than a little of the spirit of humble service to the needs of others which distinguished his other contemporary, St. Felix of Cantalice – our Fray Antonio de Badajoz eminently displayed those qualities of soul which have made the Franciscan lay brother an honored element of the Order's tradition. He joins that glorious company by reason ofhis legacy of holiness acquired in and through the notable observance of Franciscan simplicity.

"De Badajoz" as part of Fray Antonio's designation, far from signifying any hereditary gentility of birth, is nothing more pretentious than an indication of the general area of his origin, the Province ofBadajoz. That province, which lies south of the Province of Caceres and to the north of the Provinces ofHuelva and Seville, is west of historic Cordoba and imperial Ciudad Real. The province of Badajoz takes its name from its capital city, located precisely on the border with Portugal on the Rio Guadiana, which separates Portugal and Spain at that point. Antonio was born, not in Badajoz, but in the neighboring village of La Albuera.50

The friar-poet Escobedo, to whom Fray Antonio was personally known, describes him as of "clara estirpe castellana"51 – by which he intends to describe his natural qualities of soul rather than any supposed heritage of worldly prominence. Even to this day La Albuera is an unpretentious village situated about twenty-four kilometers west of the capital city ofBadajoz, straddling the road that runs from Badajoz through Extremadura to the center of power and opulence in Madrid. In the time of the martyr, even as today, La Albuera was an area of sheep-raising. More than likely, when the boy Antonio was young and growing, he engaged in that occupation, just as in another part of Spain at that same period did the future St. Paschal Baylon: the years of these two saintly Franciscan brothers coincide almost exactly.

At the time of Antonio's youth, Franciscan life in Spain was flourishing. St. Peter of Alcántara was the instrument of Divine Providence in reforming and refounding religious communities, especially in that part of the country known as Extremadura. Promoted by that paragon of penitence and mortification, the Discalced movement had transformed the Franciscan Province of San Gabriel into a nursery of Seraphic sanctity, and to that Province of San Gabriel the youth from La Albu era sought admission.52 The asceticism of Peter or Alcántara – who has been called "the second Founder of the Franciscan Order" – appealed deeply to the spirit of the young countryman, accustomed to the hard labor of the fields. A new awakening of the apostolic spirit was at the same time surging throughout Spain. And it was providential that at that same moment in time there was a new awakening of apostolic ardor, as the New World was being opened up to the message of the Gospel.

Vowed to the strictest self-abnegation as the means of attaining spiritual perfection, some years after his profession as a friar and after a period of humble service in the friaries of his province, Fray Antonio sought and received permission to go among the infidels of the New World who were being evangelized. It was a work of extraordinary sacrifice being carried out by Catholic Spain. In the same group of missionaries that included Fray Pedro de Corpa, he came to La Florida in 1587, one of twelve friars recruited by Fray Alonso de Reinoso for the struggling mission. The group left San Lúcar de Barrameda on July 21 of that year, and after a stop in Cuba arrived in San Agustin on October 5.53 Inflamed with the ideal of associating himself with the Redeemer in the salvation of humanity and despite his mature years,54 the friar from Extremadura embraced joyfully the rigors of the primitive existence in La Florida. In the words of Escobedo, the friar-poet who also came to the mission in Florida at the same time as the future martyrs, Fray Antonio "desired to dedicate his soul to God and win the martyr's palm and golden wreath."55

Of the specific details of Fray Antonio's earliest years of La Florida, little exact information has come down to us. Escobedo records that Fray Antonio, though a lay friar, was given the distinctive form of tonsure reserved for clerics, so that he would be accepted more readily by the natives.56 Where precisely he discharged the duties of catechist in the extensive area being evangelized by the friars is not on record. The friars already had mission-posts established at Nombre de Dios, just a short distance from San Agustin, as also at Mission San Sebastián and Mission San Antonio, both relatively close to the center of activity. Mission San Juan de! Puerto was more distant, and still farther was Mission San Pedro on present-day Cumberland Island, the most northerly foundation among the Timucua Indians. In any or all of these places Fray Antonio may have served, but it is certain that in whatever place he was assigned by obedience, as the humble lay brother that he was, Fray Antonio would make himself available not only for catechizing the Indians but likewise for the service of his confreres and the native people.57

Meanwhile, he was making remarkable progress in his mastery of the native language of his people. His facility in communication was to be an important factor in the development of the mission system, especially when he was assigned to live and work with the newly arrived Fray Miguel at Mission Santa Catalina. Oré in one place says that Fray Antonio knew the language of the Indians of Guale very well,58 and, in another place, calls him lengua,59 that is "the interpreter" for Fray Miguel. After the notable increase of the number of apostolic workers with the arrival of the group in 1595, an ambitious plan was developed for intensifying the work of catechizing the natives; and the importance of Mission Santa Catalina was affirmed with the appointment to that post of Fray Miguel and Fray Antonio.

The quality of Franciscan simplicity ascribed to Fray Antonio is amply attested by the account of the martyrdom given by Oré.60 As already described,61 on two distinct days (probably September 16 and 17) the rampaging Indians, having already killed Fray Pedro in Tolomato and Fray Blas in Tupiqui, sent word to the cacique on the island of Guale (St. Catherines) that he should kill Fray Miguel and Fray Antonio, the two friars at that mission.

Warned on both occasions by the local cacique, Fray Antonio in his simplicity found it impossible to believe that the natives, even in rebellion, would do them any harm. Oré's text reads: "El fraile lego (Fray Antonio) no quiso creerlo;" and "el fraile !ego (Fray Antonio) no pudiendo creer tal cosa, respondi6 Io que Ia primera vez."62 While in his ingenuousness of soul Fray Antonio could inadvertently have lost the opportunity of avoiding martyrdom for himself and Fray Miguel, the reason was his unshakable belief in the goodness even of his murderous enemies who were already plotting his death. In the simplicity of his Franciscan heart he could not conceive that they were so vicious as to do bodily harm to the gentle and gracious Fray Miguel or to himself, who had done nothing but bring to them the blessings of the loving Lord. Like the innocent Lamb of God, the two friars were indeed sacrificed by the malice of their tormentors; but it was with the practice of the highest Christian charity on the part of the guileless Fray Antonio that the sacrifice was consummated.

During the course of his Franciscan life, and with special emphasis on the period of his service in the Florida Mission, Fray Antonio gave incontestable proof of his deep piety. "He was as heroic as Mars," says his contemporary brother-Franciscan, the author of La Florida, evoking a hero of classical mythology, "in his fight against all vice, a struggle which commenced during the days of his early youth."63 As a catechist he had been a zealous and valuable assistant to the priests in announcing the Kingdom and the saving message of the Redeemer. The spirit of faith-inspired piety accompanied and sustained him to the very hour of his death.

Once Fray Miguel and he learned of the sacrifice that faced them for the sake of the Redeemer, they turned to intense prayer as they awaited the final hour, the supreme hour of life. Fray Miguel offered Mass, and then the two friars spent more than four hours in prayerful thanksgiving for all the graces which God in His goodness had provided for them: the supreme grace was their ultimate and complete sacrifice of earthy life for the sake of the Kingdom of God.

Escobedo relates that on the voyage to Florida Fray Antonio cooked the meals for everyone. In Florida, Father Reinoso gave him instructions on the proper manner of teaching the Divine Law to the natives. Ibid.