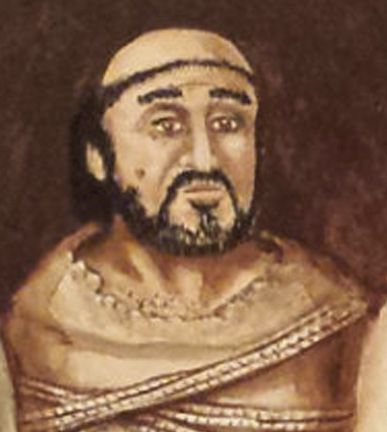 Fray Blas Rodriguez was born in Cuacos, a town in the Valley of Plasencia, in the Province of Cáceres.23 While the date of his birth is not certain, the presumption is that he was born in the decade 1550-60. The family name Rodríguez is extremely common in the region. Situated in the foothills of the Sierra de Gredos, today as in times past Cuacos is largely devoted to the raising of sheep and goats. Surrounded by forests of oak trees, the town sits at the foot of a hill known as “del Salvador." Olive-growing and the cultivation of grapes for the production of wine have traditionally been the principal source of its livelihood.

Two kilometers from this town of bucolic peace stands the historic Jeronymite Monastery of Yuste, founded in 1402 on the reputed site of the martyrdom of fourteen bishops who were slain for their faith by the Moors. Here in a palace constructed especially for the purpose, upon his abdication the Emperor Carlos V found peace in prayer and solitude; here he died in 1558. The shadowy presence of the monarch, once the most powerful sovereign in Christendom, communicates a perduring aura of mysticism to the whole countryside where the young Blas Rodríguez was born and reared. The impact of these surroundings cannot have failed to touch the soul of the growing boy with a sense of doing great things for God.

At a date not firmly established – presumed to be in the early or mid-1570's – Blas became a member of the Discalced Reform in the Franciscan Province of San Gabriel. It was a time of extraordinary fervor and zeal, an age singularly vibrant in the history of the Franciscan Order in Spain and Portugal. The Discalced stress on the eremitical life became, paradoxically, the source of vital apostolic energy and exuberant missionary activity. Ordained to the priesthood presumably in the decade of the 1580's, receiving after due process the title of confessor, Fray Blas engaged for a number of years in the exercise of the sacred ministry in the territory of his Franciscan Province of San Gabriel.24

The first certain date we have for Fray Blas' activity is the year 1590, when he offered himself for service in the new and struggling mission of La Florida. On May 17, 1590, by royal mandate twelve friars – one of them being Fray Blas Rodríguez – were authorized to sail for the New World. Not all went to La Florida, but Fray Blas was one who did. There is no information as to where in La Florida he first labored. The earliest indication we have of the scene of his labors is in 1597: at the time of the Revolt he was in the mission at Tupiqui. Though there is no absolute certainty about its location, the mission of Tupiqui is thought to have been situated slightly to the north of Eulonia, in the present-day State of Georgia. As the friars had been engaged in missionary work in the area of Tupiqui for almost a decade before the events of 1597, it is possible that Fray Blas had been assigned there shortly after his arrival in 1590.

Fray Blas' mission at Tupiqui was not far distant from Tolomato, the mission assigned to Fray Pedro de Corpa. The two friars were probably able to meet from time to time, in this way easing the strain of their solitary and difficult living. Their periodic meeting might also have afforded the occasion of spiritual refreshment, providing the opportunity of mutual discussions and consultation about spiritual and pastoral matters.

While there is no hard evidence that Fray Blas was directly involved in the marriage question, both he and Fray Pedro used their moral authority to prevent Juanillo's succession as cacique. An allegation of excessive severity which was later raised against Fray Blas probably relates to this opposition to Juanillo. In May of 1600 – more than two years after the slaughter of the friars – Governor Méndez de Canzo met with a group of eleven caciques who were suing for peace. In accepting their protestations of renewed fealty, the governor generously granted them pardon for their part in the insurrection. Emphasizing his magnanimity, he referred in strong terms to the memory of Fray Blas. If the natives of the mission in Tupiqui voiced any complaint, the Governor asserted, Fray Blas had been accustomed to threaten them and would whip them: "si algo decíam, que los habia de azotar."25 Obviously the Governor was quoting rumors passed on to him. He had arrived in San Agustin a mere three months prior to the outbreak of the Revolt in Guale. Faced with a crisis which well might ruin his own career in the King's service and could threaten the continued Spanish presence in La Florida, he did not hesitate to throw the whole blame for such an eventuality wherever he might find a scapegoat. Picking up rumors from his military advisers, he would not understand and would easily misconstrue the nature of Fray Blas' correction of the headstrong Juanillo.

In his official Relación recounting the Revolt, the then-newly arrived Governor had said that, according to information he had received (soy informado), some friars working in Guale had become involved in matters outside their sphere of responsibility (cosas que tocan mas al gobiemo que a ellos).26 The friars were not viewed by him as being responsible for the moral and Christian life of the converted Indians. Such an attitude and opinion is not surprising as coming from the military, for a constant worry of the missionaries was the persistent evil example of many of the soldiers, whose lives were wanton and dissolute.

The Governor's accusation obviously was directed against Fray Blas and Fray Pedro. They had been working in Guale, in Tupiqui and neighboring Tolomato, for some time before the arrival of the new Governor on June 2 of the fatal year of 1597. Without naming them he says specifically that "they made and unmade caciques" (ponian y quitaban caciques).27 This to him was a clear usurpation of vice-regal authority. At the same time it was a clear proof that regard for the importance of Christian morality was far from a priority in his judgment. In the view of the missionaries, however, what was involved was a practical application of Christian morality in the organization of the mission. For the matter impinged on the very authenticity of the Catholic community, the Church, which it was the missionaries' task to form and to fortify. If the mission were to succeed in teaching Gospel morality, the evil example of lapsed Christians within the community could not be allowed to contradict the Church's exposition of the Divine Law. The matter of the sanctity of Christian marriage was involved, the question of the sacred bond of Christian marriage-vows.

In the margin of the Governor's letter to the King which was referred to above, there are noted and still to be read the directions which the King gave as he studied that lengthy letter sent by his Viceroy in distant Florida. His Majesty did not fail to direct an admonition to the friars' Superior (at that time unknown to him) vaguely called the Prelado: it was that his friars should observe the provisions implicit in the Patronato Real – "que guarden el patronazgo" – and maintain good relations with the Governor. Indeed the King noted that the Commissary General should instruct the friars not to participate in political matters. The Governor was likewise to be admonished to maintain good relations with the missionaries and be careful that they, the friars, be respected – "buena correspondencia…con los religiosos y mucho cuidado de que sean respetados." It was a diplomatic solution, which did at least legitimate the missionaries' spiritual responsibility for building up the faith of Christ. As the Pope's Vicar, the King could hardly have done less.28

One of the more tantalizing aspects of Escobedo's poem La Florida is that, treating of the 1597 slaying of the five friars, it omits entirely the name and the story of Fray Blas Rodriguez. A tentative – even if not a wholly convincing – explanation of this puzzling fact is that the poet mentions only the four martyrs whom he personally had the opportunity of knowing. Both Pedro de Corpa and Antonio de Badajoz had come to the New World in his company, arriving in San Agustin just after the feast of St. Francis, 1587;29 as the poet himself attests on folio 177v. On folio 155r he testifies that he was a witness to the sending of Añon and Verascola to the mission in Florida, as they departed from the port of San Lucar on July 14, 1595.30 The friar whose name is missing from Escobedo's account, Fray Blas Rodriguez, came to La Florida in the year 1590.31 The fact that Escobedo does not mention him in any connection whatsoever does not prove, but at least suggests, that the author of the poem did not make his acquaintance at that time or know of his presence there. A confirming point is that the poet's name is not recorded in any source, in any document or chronicle, that would demonstrate his presence in Florida at the time of the slaying. The strong suggestion is that his presence in Florida had ended well before the events of 1597.

There are two other primal sources for our knowledge of the martyrs and their sacrifice in defense of Christian marriage – namely, the authenticated judicial documents relating to the trial of the natives who in 1598 were questioned in the presence of the governor, as well as Oré's authoritative Relación de los Mártires, which he compiled on the basis of the living tradition of the friars and the people in the several missions which as the envoy of the Minister General he visited in 1614 and again in 1616. Both of these primal sources clearly recount the sacrificial death of Fray Blas Rodriguez in the Revolt of 1597.32

These sources are discussed below, ch. 10.