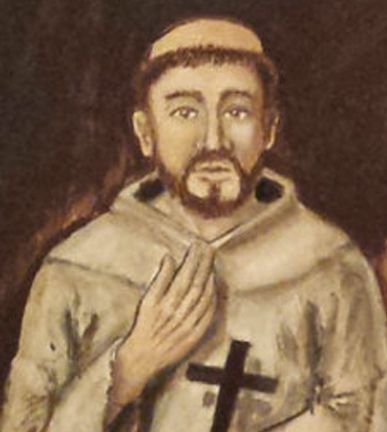 Fray Pedro, most commonly known by the toponymic "de Corpa," was born in the region of Villabilla, in the territory of the present diocese of Madrid-Alcalá.1 About 5 kms. from Villabilla there is a village called Corpa, which in the sixteenth century probably was the site of a farming community. Recently a solitary reference has been discovered designating Pedro’s family-name as "Casanova."2 No record of his birth, his reception into the Franciscan Order or religious profession, or of his ordination to the priesthood has been unearthed, but by working backward from some definite data connected with his apostolate, it is deduced that he would have been born circa 1560.3

He joined the Franciscan Order in the Province of Castile, presumably about the year 1577,4 and is thought to have been ordained to the priesthood about 1584. For a period of at least two years he exercised the priestly office in Spain, receiving the titles of preacher and confessor.5 In 1587, he joined the company of friars recruited by Fray Alonso de Reinoso, departing for Florida from the convent of Astorga, which belonged to the Province of Santiago.6 Though recruited over a period of several months, the group was obliged to wait another several months for a ship that would take them to the New World, so intense was the movement of apostolic laborers to the various mission fields of the overseas Spanish territories. These months of waiting were spent in spiritual preparation for the arduous life and the apostolate that the future held for the new missionaries.

Authorized to sail on July 21, 1587,7 the group consisting of twelve friars under Fray Alonso de Reinoso left the port of San Lúcar de Barrameda on a ship commanded by Gil Vadillo. In the group was Fray Antonio de Badajoz, the lay friar who also was to give his life for the Gospel in the slaughter of 1597.8 Fray Alonso de Escobedo, the poet-chronicler of La Florida fame, officially considered a member of this group, had sailed from the same port somewhat earlier and would join the others for the last lap of the journey from the port of Havana.9 At the setting of the sun on September 29,10 the twelve apostles, under the leadership of Fray Reinoso, left Havana and headed for La Florida. This last lap of the journey took six days.11 Having observed the feast of St. Francis at sea the previous day, on October 5 they landed at San Agustin.

The newly arrived brethren were greeted enthusiastically by the few friars already in the mission, manfully struggling to keep alive the work of evangelization which had been begun some decades before by the Franciscans. After the formality of a meeting with the Governor, Don Pedro Menéndez Márquez,12 and a few days of rest, Fray Pedro undertook duties in the general region of the town. We do not know for certain precisely where he began his missionary work in La Florida, but it is certain that he spent some time in one or the other of the missions in the region of San Agustin: Nombre de Dios, San Sebastián or San Antonio and its territory, San Pedro or San Juan.13 How long Fray Pedro remained in any of these places mentioned by Oré is uncertain; before the decade was out, however, he was assigned to the mission in Tolomato in the territory of the Guales.14 That mission was one of special importance, as the Indian village ofTolomato was closely linked with the traditional headquarters of the Guales in Espogache.15

Fray Pedro was singularly successful in converting the natives. He is said by Oré to have contributed in an extraordinary way to the conversion of the Indians, even at a time when not many among them were asking to be admitted to Baptism. This friar, according to the same Oré, had a reputation as a zealous missionary. Oré further attests that he had a good command of the language of the Guales.16

At the first mention of this friar in Oré's work -- which is the basic source for information on the development of the Franciscan mission in the area of La Florida now known as Georgia -- he records that Fray Pedro was already working in the Province of Guale when in late September of 1595 the large group of twelve new missionaries arrived in La Florida. The coming of so many additional apostolic laborers then made it possible to extend the work of evangelization among the Guales.17

Fray Pedro's role in the events leading to the martyrdom was central. While no document refers to him as regional superior in the Guale missions, the very fact of his being in charge of the mission at Tolomato, gave him preeminence. It was the chief town of the district, and, as already mentioned, the royal arms of Spain were displayed in the council house, a reminder that the natives were vassals of His Majesty.18 Fray Pedro was a logical choice for this assignment. With the exception of the octogenarian comisario Fray Francisco Marrón, resident at San Agustin, and two lay brothers, Fray Pedro had the longest service among the natives.

When Juanillo, heir-apparent to the office of cacique among the Guales and a baptized Christian took a second wife,19 Fray Pedro probably had the ultimate responsibility for defining the official position of the Church. Perhaps after consultation with Fray Blas in the nearby mission of Tupiqui, and adhering faithfully to the Church's teaching on the essential nature of Christian marriage as the exclusive union of one man with one woman, Fray Pedro admonished the errant Juanillo to adhere to the marriage promises he had made as a baptized Christian in receiving the sacrament ofMatrimony.20 Moreover, in union with Blas, he made know his opposition to Juanillo's succession as cacique.21

In his epic poem La Florida, Escobedo – who had come from Spain to the New World at the same time as Fray Pedro de Corpa – attests that the future martyr had a special regard for the central Franciscan virtue, that of poverty. The virtues of chastity and obedience, likewise the object of his Franciscan profession, were especially dear to him. "I and the people who accompanied him to the land where we lived together are witnesses of his sanctity. Poverty was his favorite virtue. He admired the chaste and holy angelic choir and he was submissive to his bishop or superior, always demonstrating his obedience by quickly obeying all orders. Being a wise and holy man, the love of God burned in his heart, and by means of prayer, abstinence and self-discipline he gave good example to the Indians of the West (New World) whom he strove to convert."22

Fray Lucas de Yanguas, states that Pedro de Casanova was received into the Franciscan Order at the convent of Santa María de Jesús, July 28, 1581. See De Castro, 244. Since Pedro was already priest, preacher, and confessor in 1587, the date given by Fray Lucas seems late.