A New World: La Florida in the 16th Century

The story of that vast territory which in time was to become the United States of America begins with the earliest efforts to establish permanent colonies on the land the Spaniards called "La Florida."

Juan Ponce de Leon, having discovered the peninsula (which he imagined to be an island) around Palm Sunday of 1513, eight years later unsuccessfully attempted to plant a colony on the west coast of the land. There is a well-founded presumption that, even though his expedition probably did not have any priests to act as chaplains, as part of the ceremonial claiming of the land for his sovereign, he himself read the formula proclaiming the Catholic Faith.1 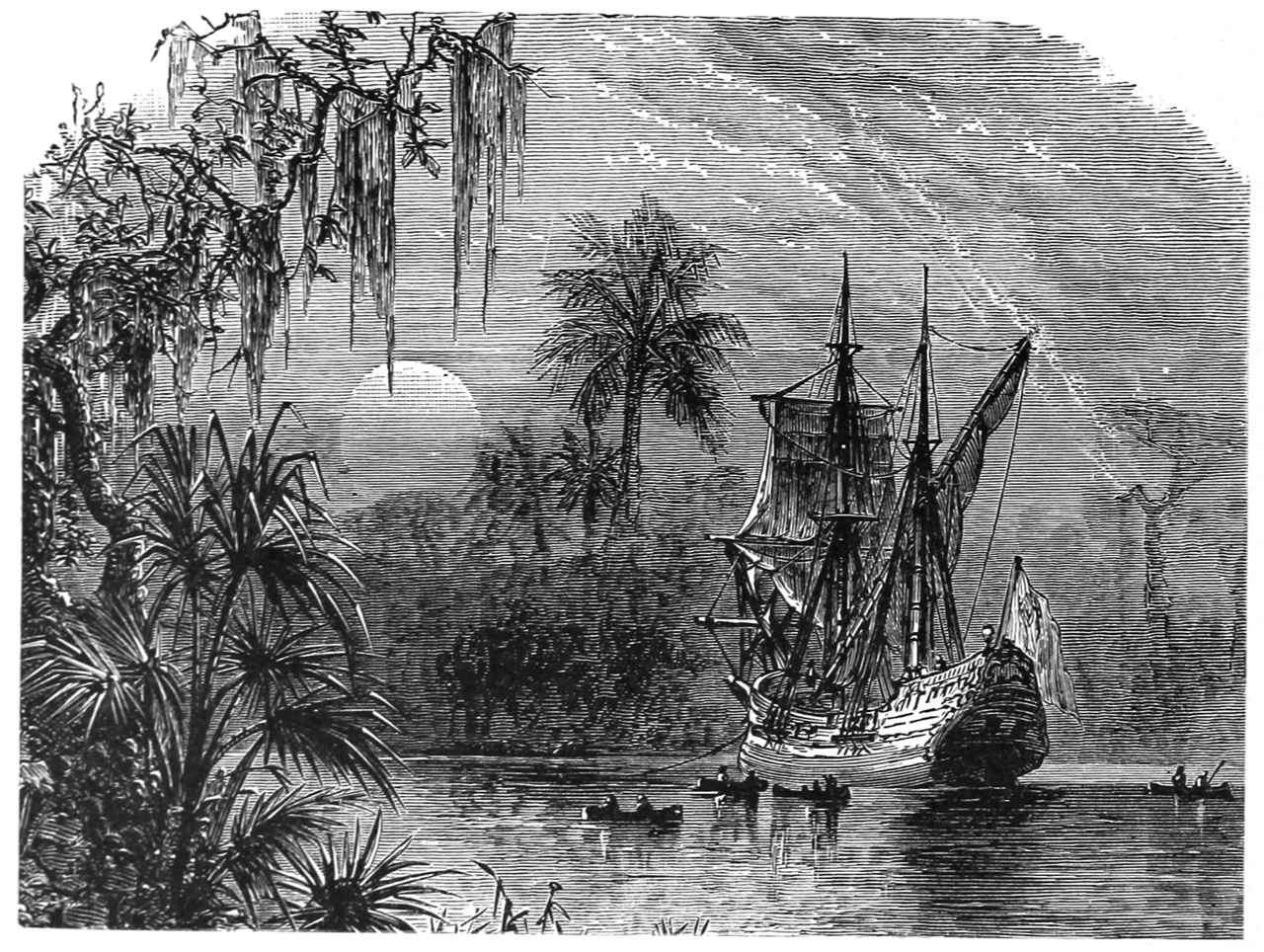 Impelled by the thirst of discovering ever more interesting aspects of this "Land of Flowers," courageous explorers made of the sixteenth century an era of great enterprises. Lucas Vazquez de Ayllon made three voyages of discovery and exploration in the 1520s. In 1520 he arrived at the area which from the Indians he learned was known as Chicora. There he viewed the cape to which he gave the name "Santa Elena." For a brief period, Santa Elena was the capital of the colony of La Florida. It was to become the site of an important Spanish military installation, from which the Spanish withdrew only two centuries later before the advance of the English pushing down from the North.

In 1525 Vazquez de Ayllon returned to the New World with five hundred men, landing in the area which the natives called Guale. There, most of his men died in the following winter, victims of unexpectedly cold weather and the lack of nourishing food. Vazquez himself died in October of 1526.2

Panfilo de Narvaez, in 1527, reconnoitered the west coast of Florida. He had set out from Spain with five vessels and almost two hundred men. In the course of the expedition all – with the exception of four – died, some at sea, others at the hands of the natives, most of starvation. Among those who died were the five Franciscan friars who accompanied the ill-fated expedition. The superior of the Franciscan group was Fray Juan Suarez, whom before the expedition left Spain Pope Clement VII, at the request of the Emperor Charles, had named bishop. Though bishop-elect, with the all-embracing title of bishop of Rio de las Palmas y La Florida, he was never consecrated.3

No expedition is better known than that of Hernando de Soto. The young nobleman had already had valuable experience with Francisco Pizarro in Peru, when he conceived the plan of penetrating the mysterious land of La Florida. After careful preparations in Spain, where he had recruited a small army of like-minded adventurers, in 1539 landing at the Bay of Espiritu Santo (Tampa), he set out for the interior of the unknown land. Penetrating the unknown from the west coast of La Florida, the hardy explorers during three years – 1539 to 1542 – traversed territory which today forms part of the States of Florida, Georgia, South Carolina, North Carolina, Tennessee, Alabama, Mississippi and possibly Texas. This vast world was all vaguely thought of as forming part of La Florida. De Soto died in 1543 – a young man of forty-two years – on the west bank of the Mississippi and was ceremoniously buried in that great river.4 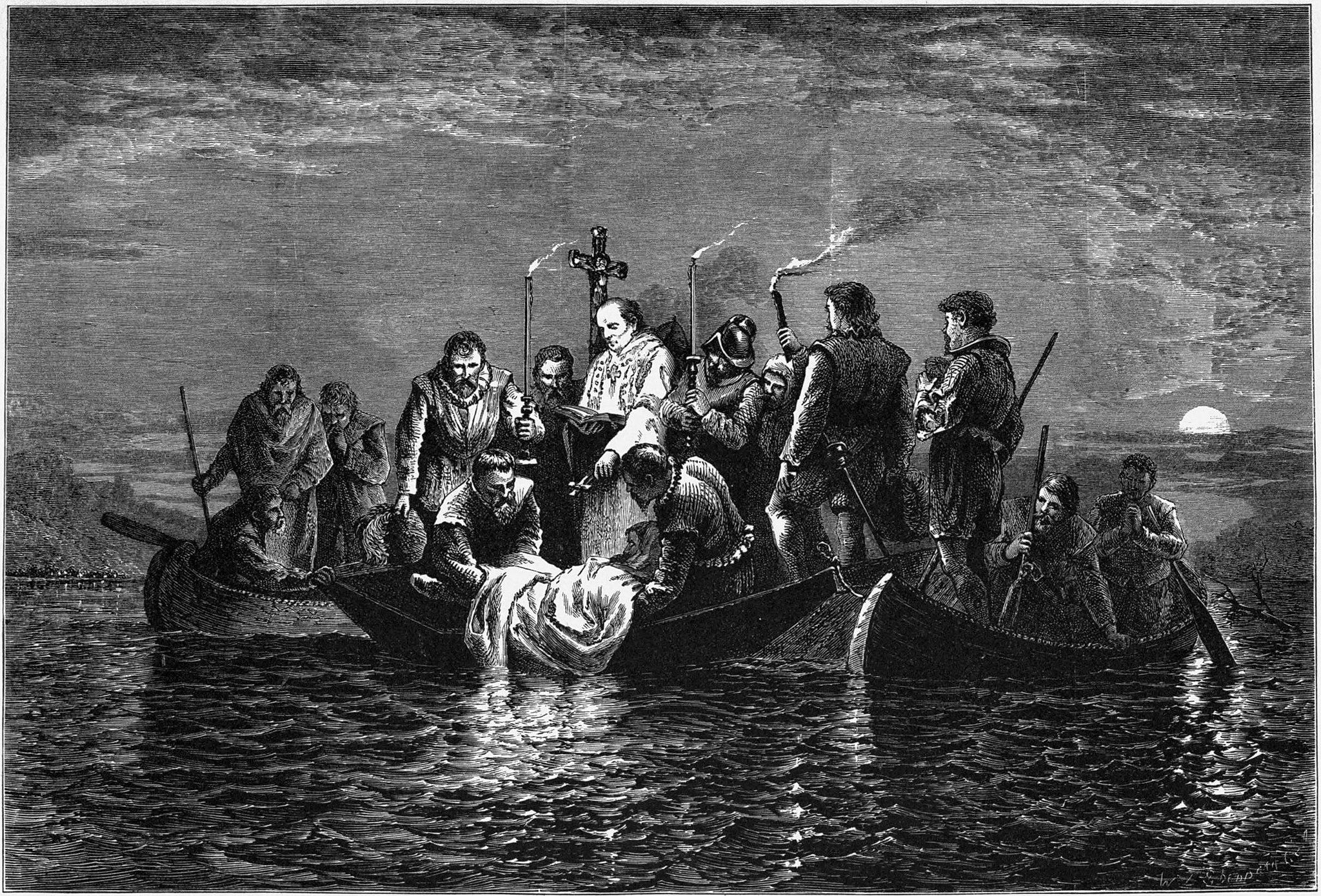 The Burial of de Soto, William A. Crafts

A high-minded Dominican missionary, Fray Lucas Cancer de Barbastro, conceived the idea of dedicating himself to the conversion of the natives of La Florida, dispensing with the support of the military. In a short apostolate in Guatemala he had succeeded in pacifying and converting many natives. Hearing and reading about the ferocious Indians of the region of La Florida, he felt inspired to attempt the same type of apostolate in that peninsula. With due authorization of the King of Spain, in 1549 he came with three Dominican confreres, planning to make contact with Indians who had not already been subjected to the cruelty of the Conquest. His idealistic effort was a failure. Through trickery on the part of some whom he had trusted in his peaceful plan, he was directed to and deposited precisely in the area of Tampa Bay where both Narvaez and de Soto had earlier caused havoc among the natives. And he paid a long-standing debt for old offenses. Cancer himself and several of his fellow religious were slaughtered as they sought to bring the message of the Savior's love to the aborigines.

A decade later one more attempt to thwart the persistently adverse circumstances was mounted by the new sovereign of Spain, King Philip II. Spiritually shepherded by six Dominicans, on June 9, 1559, a formidable squadron – such as had rarely before been seen in the New World – under Tristan de Luna y Arellano set sail from Vera Cruz in Mexico. It was to be a peaceful conquest, with well over a thousand settlers, including women and children, to start a colony in La Florida. A force of five hundred soldiers accompanied them for protection. A month of fair sailing brought them to the west coast of La Florida, where they landed at Ichuse (Pensacola Bay) on the eve of Assumption Day. With the purpose of finding a favorable site for the planned settlement, two large parties were sent out from the coast to the interior, but in that world of marshes neither one found any evidence of fertile soil.

Worn out and ill from the sub-tropical heat, the disillusioned explorers headed back to the coast. By that time it was mid-September, the season of the worst hurricanes – and there was a hurricane building up in the bay. With fury the storm struck, destroying the vessels which had brought the colonists from Mexico, and ruining the store of food which they had counted on for the weeks and months in the uncertain future.

Without shelter, without food, without hope, the survivors struggled through a whole year of indescribable privation, reduced to eating the flesh of their slaughtered horses for meat: and for whatever sustenance might be extracted from the rotting leather, to chewing on the no longer needed harness.

Broken in spirit, in a dramatic scene during Mass on Palm Sunday, 1561, de Luna admitted defeat and asked for forgiveness. As if by a miracle, the following day a vessel appeared with provisions, and on it a replacement for the hapless de Luna. The remnant – a mere fraction of the original colony – was returned to Mexico. It was the sixth notable attempt to colonize La Florida in half a century. All had failed.

NEXT: Spain's Twofold Interest in Colonization